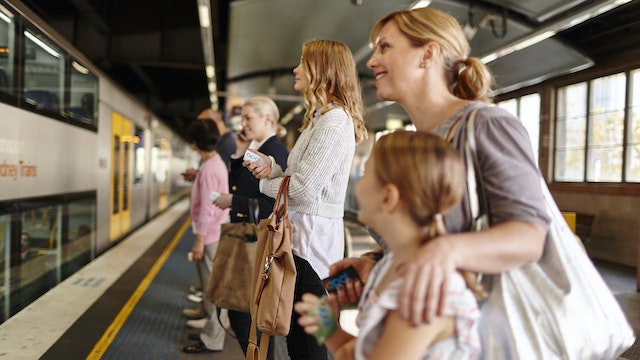 With thousands of extra services running and major road closures in place, public transport is the only way to travel on New Year’s Eve. Large crowds are expected so please plan your trip to and from the city ahead of time and consider all the available travel options.

You can tap on and off public transport services using an Opal card or American Express, Mastercard, Visa contactless card or linked device.

Extra trains will run during the day on New Year’s Eve and into the early hours of the new year.

These stations have different arrangements for New Year’s Eve to safely manage crowds:

Thousands of extra bus services will run throughout the day and night. Services to and from the city will use different routes and bus stops from 5pm and 7pm while road closures are in place in the city.

In North Sydney buses will be diverting from 3pm.

Buses in local council areas will also be affected by road closures so plan ahead.

Ferries are a very popular way to travel on New Year’s Eve and services typically begin to reach capacity from mid-afternoon. If you’re looking to catch a ferry, plan to arrive early in the day as queues will be long and consider a plan-B transport option including local bus services if ferries are at capacity.

Access to some ferry wharves including Circular Quay, Milsons Point and McMahons Point will be affected on New Year’s Eve as surrounding vantage points reach capacity during the day.

You may not be able to catch a ferry to your preferred destination and will need to consider other transport options including trains and continuing on foot instead.

Ferry stops and times will be affected. Some ferries will stop operating on the harbour from the early evening.

Sydney Light Rail services run regularly through the Sydney CBD, South East and Inner West suburbs. Services will be extended to run until 4am on New Year’s Day.

From 5pm CBD services will not run between Circular Quay and Town Hall, then from 7pm services will start and end at Central due to road closures. Services will continue to run regularly throughout the night between Central, Randwick and Kingsford.

Change for trains or continue on foot to your vantage point.

Change for trains at Central for access to Harbour foreshore vantage points, or continue on foot for access to Darling Harbour and Pyrmont.

From 8pm to 1.30am L1 services will not run between Convention and Central due to large crowds and road closures. Continue on foot towards Central for trains home.

Security guards will be present at various taxi ranks on New Year’s Eve to help you get home safely.

Some roads will be closed to people walking and cycling. The walkway and cycleway on the Sydney Harbour Bridge will close from 6pm New Year’s Eve until 2am on New Year’s Day. The Cahill Expressway walkway over Circular Quay will close from 8pm Tuesday 28 December.

Major cycleways in the city centre will be closed as major roads begin to close for safety throughout the day on New Year’s Eve. Spaces to lock up bikes in the city will be limited.

Getting out of the city is different on New Year’s Eve. The way you arrived will be different to the way you leave to get home as many roads will be closed to both pedestrian and motorists. Plenty of staff will be on the ground along with extra signage to help you find your way back to transport hubs to get home.

Be prepared for a longer walk to buses and trains. Some train stations may have different entry and exit points. Try to leave the city after 1am to avoid the crowds.

Follow @TrainsInfo, @SydneyMetro, @BusesInfo, and @FerriesInfo on Twitter for real-time service information or use a real-time transport app to track your service.

From early December you can vist Transport NSW for more details on all the extra services and to plan your trip on New Year’s Eve.